“If my sister & my mother can’t study, then I don’t accept this education” Afghan professor tears his certificate to oppose Taliban’s ban on women getting an education (video) 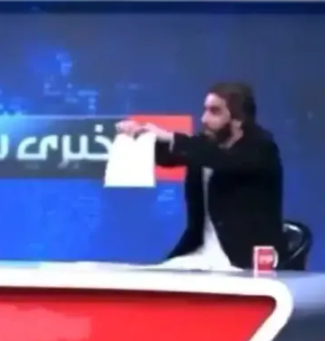 A professor from Kabul University has opposed the Taliban’s ban on women students in universities in Sharia-governed Afghanistan.

Earlier this month, The Taliban banned entry of female students in Universities in Afghanistan.

This has sparked outrage from the international community.

During a live debate programme on TOLO News, an Afghan professor from Kabul University, tore up his diploma certificates saying that he does not need those certificates if the women of the country are denied access to education.

A video clip of the debate show was shared on Twitter by Shabnam Nasimi, former policy advisor to the Minister for Afghan Resettlement & Minister for Refugees.

As seen in the video, the Kabul University professor, identified as Ismail Mashal, held up his diploma certificates and then tore them up one by one.

While tearing the certificates, the professor is heard saying, “I do not need these certificates as now there is no place for education in this country. I cannot accept this education if my sister and mother cannot study.”

Taliban has also barred women from most jobs and made it compulsory for women to wear Hijabs and Burqas. Besides, Afghan women are also banned from public parks and gyms.

Then, on Dec. 20, the Sharia-compliant Taliban regime banned university access for female students.

Below is a video of the Afghan professor’s audacious protest on TV.

“From today I don’t need these diplomas anymore because this country is no place for an education. If my sister & my mother can’t study, then I DON’T accept this education.” pic.twitter.com/cTZrpmAuL6