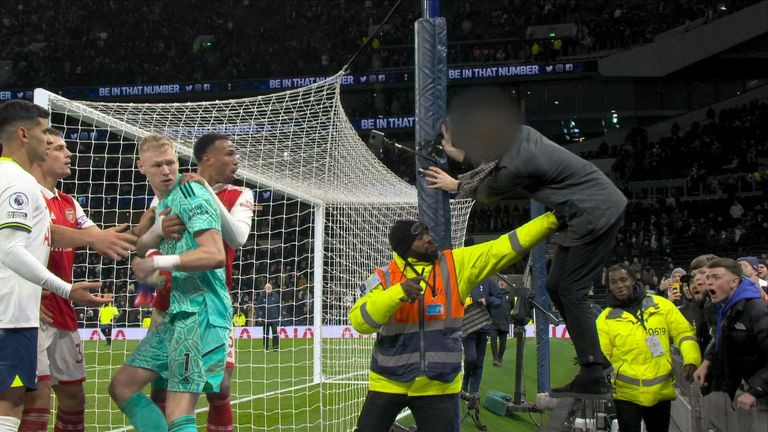 A 35-year-old man has been charged with assaulting Aaron Ramsdale after the Arsenal goalkeeper was kicked at the end of their north London derby win over Tottenham.

Joseph Watts of Hackney is due to appear at Highbury Magistrates’ Court on February 17 after being arrested yesterday over the attack at the Tottenham Hotspur Stadium on Sunday.

Tottenham have been working with the Metropolitan Police’s football investigations team to identify the supporter, who clambered towards the pitch to kick Ramsdale.

After the game, Tottenham said they would work ‘to take the strongest possible action, including an immediate ban from Tottenham Hotspur Stadium’.

Watts is not in custody but a Metropolitan Police statement confirmed he had been charged with assault by beating, going on to an area adjacent to a playing area and throwing a missile on to a football playing area, both contrary to the Football (Offences) Act 1991.

Goalkeeper Ramsdale was met by a fan as he went to collect his bottle from behind the goal. The supporter lashed out and appeared to make contact with the England international, who admitted after the match that the incident left a ‘sour taste’ following his Man of the Match display.

A statement from the Metropolitan police read: ‘A man has been charged with assaulting an Arsenal player after a match at the Tottenham Hotspur Stadium on Sunday, 15 January.

‘Joseph Watts, 35 (23.06.87) of Hackney was charged on Tuesday, 17 January with assault by beating, going onto an area adjacent to playing area and throwing a missile onto a football playing area, both contrary to the Football (Offences) Act 1991.

‘He is due to appear at Highbury Magistrates’ Court on Friday, 20 February.

‘The Met’s Football Investigations Team were assisted in their enquiries by Tottenham Hotspur Football Club.’

The FA strongly condemned the incident after the north London derby, insisting the behaviour was ‘wholly unacceptable’.

The governing body said: ‘We strongly condemn the incident involving a spectator that followed today’s Premier League fixture between Tottenham Hotspur and Arsenal.

‘This is wholly unacceptable behaviour and we will work together with the police, the relevant authorities and the clubs to ensure the appropriate action is taken.’